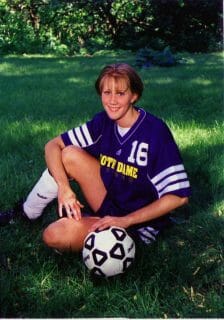 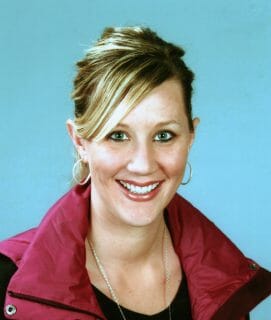 Before going on to a record-setting career at Culver-Stockton College, Beth (Zeidler) Schreiter was a two-sport standout at Quincy Notre Dame on teams that were successful at the state tournament level.

Schreiter, a 2000 graduate of QND, was a three-year starter on the volleyball team as a middle hitter and blocker. She had 205 kills as a junior, third-best on the team, and a team-high 71 blocks to help the Lady Raiders capture the 1998 Class A state championship. Her 233 kills were second-best on the team as she helped QND return to finish second in the 1999 Class A state tournament.

She was a four-year starter in soccer, and she was a forward on the 2000 team that was the first in school history to reach the state tournament, which was only one class at the time. She scored 12 goals, third-best on the team, and had 15 assists for the Lady Raiders, who finished 26-1.

Schreiter was a two-time first-team selection to the all-Heart of America Athletic Conference soccer team while she played at Culver-Stockton. She holds school records for goals in a game (6), season (25) and a career (81), and she received the NAIA Scholar/Athlete Award in 2002 and 2003.

Schreiter and her husband, Bryan, now live in Madison, Wis., where she is a behavioral health consultant for Access Community Health Centers. They have a newborn son, Colin.

Thank you to Quincy Notre Dame for a truly amazing and memorable high school experience. During my four years at QND, I learned life lessons both inside and outside the classroom. My participation on both the soccer and volleyball teams taught me the values of teamwork, dedication, humility and fortitude. I was blessed with the opportunity to form lasting friendships and develop leadership skills. The support and encouragement from the administration, teachers and coaches made a lasting impression and inspired me to give me best effort at all times. — Beth (Zeidler) Schreiter