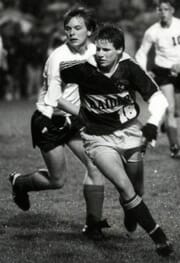 Quincy Notre Dame enjoyed its greatest run of soccer success in the mid-1980s, and Chris Mackenzie was right in the middle of all of it.

Mackenzie, a 1987 graduate, earned three state tournament medals during his high school career. As a sophomore, he started in the midfield for a team that lost the 1984 state championship game in a shootout. During his junior season, he scored six goals and assisted on five others as a midfielder. Three of his goals came in the sectional title game when the Raiders rallied from a one-goal deficit to defeat Springfield 4-1. QND went on to claim the 1985 single-class state championship that season.

With eventual pros Mark Thomas and Kevin Koetters graduated from the 1985 team, Mackenzie helped pick up some of the scoring load by registering 19 goals and five assists. His last two goals of the season came in the third-place game of the state tournament as he closed his prep career with a 2-1 victory over New Trier. He finished with 29 career goals.

Mackenzie went on to play four years of soccer for the United States Military Academy. He was a starter for three years and ended his career with four goals and nine assists. He was the team captain as a senior, and he led Army to a 2-1 victory over his father’s team, Quincy College, in 1990.

Mackenzie and his wife, Leigh, are the parents of a son, Julian Butler. He is employed by Investment Planners, Inc., of Quincy, and also is an assistant soccer coach at Quincy University.

It was an honor to hear the news that I was being inducted into QND’s Hall of Fame. So many talented athletes that have worn the Blue and Gold. First and foremost, I thank God for the talents that He has given me, and so I owe it all to Him for my success on the soccer pitch. I’d also like to thank my parents, Jack and Sharon Mackenzie, for all their support. Growing up in a “soccer family” taught me great lessons on and off the field. Thanks must also go out to my two high school coaches, Al Knepler and Frank Longo. Those two were key in my development to push me into my college career. Soccer is a team sport, and I couldn’t have done anything without all my teammates. I was surrounded by some great players, and I can’t thank them enough for the memories that I have of sharing “the beautiful game” with them. Though they weren’t around during my QND days, I’d like to thank my family, Leigh, Julian and Isabella, for making every day a joy to be alive.