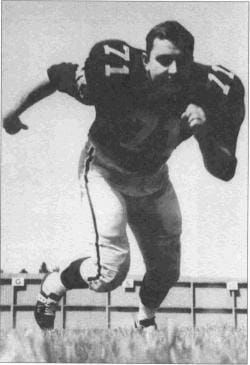 Lavery’s path to the Big Ten Conference started at Christian Brothers High School, where he was a standout two-way lineman.

Lavery, a 1964 graduate of Christian Brothers, was a three-year letterwinner in football, plus he won two letters in track and one in golf. As a sophomore, he earned honorable mention on the Chicago Daily News all-state football team. As a senior, he moved up to special mention on the same all-state team. He played offensive tackle, defensive tackle and fullback during his high school career.

Several colleges recruited Lavery out of high school, including Iowa, Iowa State, Indiana, Colorado State, Pennsylvania, Xavier, the Air Force Academy and Southern Illinois. Lavery chose Iowa, where he earned some playing time as a sophomore (freshman were ineligible to play at the time). At 6-foot-3 and 246 pounds, he lettered as a junior and a senior as the left offensive tackle.

Lavery played alongside several NFL players and blocked against Bubba Smith from Michigan State and Ted Hendricks from Miami, both of whom went on to All-Pro careers as defensive ends. Lavery graduated from the School of Business at Iowa in Feb. 1969, and he received letters of inquiry for playing professionally from three NFL teams and one team in the Canadian Football League.

He has volunteered his time to coach several youth athletic teams at both the YMCA and the CYO (where he is a member of the Hall of Fame). He also helped develop and served as the first chairman of the Gus Macker 3-on-3 Basketball Tournament.

Lavery is the co-owner of Franklin-Lavery & Associates, Inc., an investment planning firm. He and his wife Karen are the parents of five children — Michelle, John, Kristin, Matthew and Mark.

I owe great thanks to all of my coaches — at CBHS, Bob Cudney and Ken Scheu, and at the University of Iowa, Jerry Burns and Ray Nagel. These men taught football, teamwork and a strong work ethic. To all of my teammates and classmates, I loved playing with you and for you. For my parents, Joe and Anita Lavery, and all of my family, I am grateful for the love and support that has always been provided to me. To QND and all of its earlier incarnations, thank you for providing a place where young people can learn and understand their real role in life. I benefited greatly.