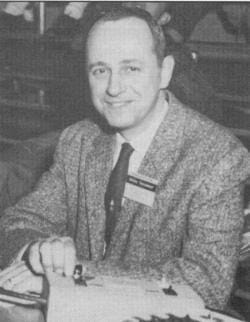 It’s been a few years since Stegeman has walked through the halls of Quincy Notre Dame, but there was once a time when he was a fixture at every basketball game played at Quincy College Academy, Christian Brothers, Catholic Boys or Quincy College, working at the scorer’s table as a volunteer official timekeeper.

Stegeman, a 1938 graduate of Quincy College Academy, was asked by coach Mart Heinen in 1937 to “run the clock” for a junior varsity game played at the National Guard Armory downtown. He soon had the job full time for the varsity, and he accepted that position when he attended Quincy College. After more than 1,500 games and 38 years behind the bench, Stegeman finally ended his years of meritorious service to both the high school and college in 1973. At QND, he kept score for teams coached by some of the school’s greatest coaches — Heinen, Gene Runde, Elmo McClain, Hank Berg and Bob Bender.

“When basketball season came around, I wasn’t home hardly any nights of the week,” said Stegeman. “But I really enjoyed it, and I got to know a lot of people.”

Stegeman grew up in St. Francis Parish and was active in most sports. At Quincy College Academy, he played baseball and basketball, and he played baseball for one year at Quincy College. He went on to coach CYO teams at St. Francis for 13 years, and his teams won several Springfield diocese tournaments. He also helped out as a timer for CYO basketball games and for pro wrestling cards during the Quinsippi Festivals. He retired from the Electric Wheel Division of the Firestone Tire & Rubber Company after 42 years.

Stegeman and his wife, Clara, were married for 54 years before her death on Jan. 29, 1999. He has a son, Roger, who lives in Springfield with his wife Sharon and their sons Roger Jr., Ryan and Michael; and a daughter, Nancy Brown, who lives in Quincy.