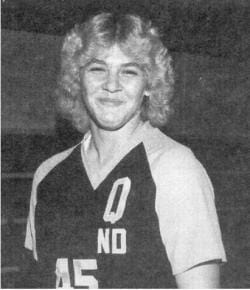 Inducted 1997.  Led QND to Two State Championships and a Second Place Finish as a Senior.

Fielding ended her career at QND with five medals earned in state tournament appearances, but her most remarkable accomplishment was leading the Lady Raiders to two state championships and one runner-up finish in her senior year.

A 1981 graduate, Fielding was a starter on the volleyball team which won the 1980 Class A state championship with a 34-0 record. She was named to the all-state tournament team as well as to alltournament teams at Southeastern, QND and Quincy High School. She also played on the 1977 team, which placed second in the state tournament, and the 1978 team, which took first place.

Fielding earned all-state tournament honors at the 1981 Class A state basketball tournament, at which QND placed second with a 28-4 record. Her basket with one second remaining enabled Notre Dame to defeat previously undefeated Carlinville 54-53 in the super-sectional. She shared the team’s MVP honor and was the team’s top offensive player. She was named to the Quincy Herald-Whig’s All-Area team and earned all-tournament honors at Camp Point Central and Payson.

Fielding capped off her sensational senior season by hitting .600 at the single-class softball state tournament, which QND won with a record of 29-0.

She went on to Quincy College where she was a starter on the volleyball and basketball teams as a freshman. She was the leading rebounder that season and still holds the single-season record for field goal percentage at 64.2%.

Fielding and her husband Mike are the parents of two boys, Torrey and Dakota. She lives in Quincy and is employed by Good Samaritan Home in the therapy department.