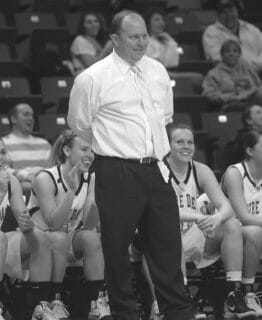 Inducted 2013. Under Coach Orne, the Lady Raiders have reached heights that only a handful of teams in state history have accomplished.

Quincy Notre Dame has had one of the best girls basketball programs in the state for nearly four decades, but under Eric Orne, the Lady Raiders have reached heights that only a handful teams in state history have accomplished.

Entering the 2013-14 season, the Lady Raiders have won 79 consecutive games against in-state competition and 53 straight overall. QND has won back-to-back-to-back state championships, becoming the fourth team in IHSA history to three-peat as champions, joining
Teutopolis (1988-90), Bolingbrook (2009-11) and Lombard Montini (2010-12). The 2012-13 team went 30-0, achieving the Lady Raiders’ first perfect season since the 1983 state title team went 30-0. They also became the first team to win titles in consecutive seasons in different classes. QND’s titles in 2011 and 2012 came in Class 2A.

The 2011-12 team may have been the best small-school girls team in Illinois history. The Lady Raiders defeated their opponents by an average of more than 40 points per game and finished among the top 50 teams in the nation, according to ESPN’s national rankings.
Orne’s teams have gone 184-8 in the last six seasons, winning five state tournament trophies. His career record is 333-73.

When he’s not on the basketball court or the softball diamond, Orne is the associate athletic director at Quincy Notre Dame. He and his wife Tracy live in Quincy.

“It is truly humbling to be named to this prestigious group of individuals and teams that have provided all of us a great sense of Raider Pride. Any accolades, however, must be shared by my assistant coaches, trainers and the vast number of hard-working, talented players who continue to carry on the tradition of success here at QND. The opportunity to share in the camaraderie, struggles and triumphs of these teams have made for some of the best moments a coach could have. I would like to thank Bill Connell and Ray Heilmann for giving me this great opportunity here at QND. Lastly, I also would like to thank my parents for their support and to my wife Tracy for not only coaching alongside me but for providing love and balance in my life.”