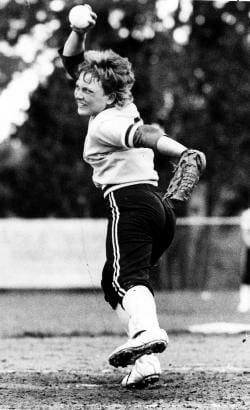 Many athletes with more talent have played for QND, but it is difficult to find many who played with more determination and passion than Julie (Miller) Wilson did on the softball diamond.

Wilson, a 1986 graduate, was a standout at the plate, in the field and on the pitcher’s mound for the Lady Raiders. She was the starting shortstop as a sophomore on the 1984 team that won the state championship, and she was a starting pitcher for the 1985 team that took third in the state. She batted .342 for her career with 15 doubles, 14 triples, 4 home runs and 65 runs batted in. As a pitcher, going up against many Class AA teams, she compiled a 40-7 record with a 0.52 earned run average and 432 strikeouts in just 352 innings. Her 27 career shutouts ranks third in school history, and her 0.15 earned run average during her senior season ranks as the third-best single-season ERA.

Wilson went on to play at Quincy University. She pitched occasionally, even going 7-4 with a 2.53 earned run average as a sophomore, but she spent most of her career at third base. She batted .385 as a sophomore, .353 as a junior and .336 as a senior, and she was named to the all-Central Region first team as a junior in 1989.

Wilson and her husband, Jeff, live in Quincy. They are the parents of three children — Aubrey, Blaine and Carly. She works at ADM Alliance Nutrition as a lab analyst.

Quincy Notre Dame has long been a home to outstanding female athletes, and I humbly accept my place in the QND Hall of Fame. I wasn’t exactly a finesse player, but I was blessed with a competitive spirit and the opportunity to play with great athletes — my sister, Amy, Caren Kemner, Lori Vogel, Amy Eversman, Kim Hessing, Lori Damhorst, Carrie Voisin, and the list goes on. I had fantastic teammates. We loved to play, and we loved to win. I would like to thank Coach Starkey, the coaching staffs and faculty members past and present for your commitment and guidance on the field and in the classroom. I would like to thank my parents for their unending support and faith, for promoting hard work and 100 percent effort in everything you do. Finally, my heartfelt gratitude goes to the Hall of Fame committee for the walk down memory lane. What a great time it was. Play hard. Play fair. Thanks.