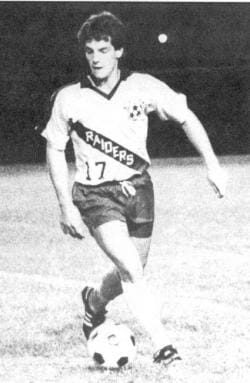 Reis helped Notre Dame qualify for the state soccer tournament in 1983, when the Raiders lost in the quarterfinals, and in 1984, when the Raiders finished second. QND and Palatine Fremd battled through regulation play and eight overtimes before the outcome was finally decided on penalty kicks.

He was a two-time Parade All-American, and he also was named to the National Soccer Coaches Association and adidas All-American teams as a senior. He was named to the Chicago Tribune All-State team and was Notre Dame’s team captain. He started in a school-record 98 consecutive games and finished his career with 30 goals and 15 assists.

Reis went on to play soccer at Saint Louis University for one of the nation’s most storied NCAA Division I programs. He played in 85 games for the Billikens, starting in 67, and graduated with a degree in physical therapy.

Reis lives in Quincy with his wife, Cindy, and his sons, Connor and Taylor. He is the co-owner of Advance Physical Therapy and Sports Medicine.